Maroua Mehri has a Ph.D. in computer science from the University of La Rochelle in 2015. She has an engineering degree in computer engineering from the National Engineering School of Sousse (ENISo) in 2009 and two MSc. degrees in image processing from the University of Rennes 1 and the ENISo in 2011. She is currently an assistant professor in computer science at the Computer Engineering Department in ENISo. Her research activities are currently carried out at the LATIS and the LITIS laboratories. Her main research interests are pattern recognition and machine learning in the fields of historical document image analysis and medical image processing.

Pierre Héroux received a B.Sc degree in electrical engineering in 1994 and a M.Sc. degr

ee in computer vision in 1997. After a Ph.D. in Computer Science under the supervision of Prof. Yves Lecourtier and Dr. Éric Trupin, he conducts his research as an associate professor in the learning team of the LITIS Laboratory at the University of Rouen Normandy. His research interests are related to graph based methods for pattern recognition and their applications to document image analysis and understanding.

Rémy Mullot received his Ph.D. in image analysis from the University of Rouen, France in 1991. He is currently a full professor in the department of computer science at the University of La Rochelle and work with the L3i Laboratory in La Rochelle, France. His research focus on image document analysis and recognition for more than 20 years, with applications to historical documents. 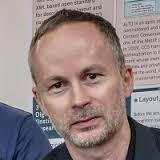 and CERAM-CNRS Sophia-Antipolis (software engineering master, 1991), is the OCR and digital publishing formats expert at the BnF since 2012. He works on all the BnF heritage digitization and enrichment programs (OCR, e-books, …) and participates in French and European research projects on these topics (e.g. IMPACT, Europeana Newspapers) and the application of research results to digital libraries. His main research topics are OCR quality and heritage newspapers digitization and digital mediation. He’s also a member of the ALTO Editorial Board. Prior to that, he was an IT R&D Engineer and project manager, and then worked as a science editor and a consultant in the publishing industry.

Bertrand Coüasnon received the Ph.D degree in Computer Science from the University of Rennes 1, France, in 1996. After his PhD, he spent few months at AT\&T Bell-Labs (Holmdel/USA).   From 1996 to 2002, he was an associate professor in Computer Science at the National Institute of Applied Sciences (Insa of Rennes), France. From 2002 to 2005, he was a Research Scientist (secondment) at Inria. Since 2005 he came back to his associate professor position at Insa. Since his PhD, he worked in the Imadoc research group at Irisa Laboratory (now the Intuidoc research group) on knowledge formalization, generic methods for structure recognition and handwriting recognition. He is a co-founder of the Evodia company (created in October 2005) that stems from Imadoc research group.

Bill Barrett is a Professor of Computer Science at Brigham Young University where he has served as Department Chair and Associate Chair. He is co-founder of HIP and works is in the areas of handwriting recognition and intelligent indexing. Barrett helped pioneer the field of Digital Angiography and has developed a variety of interactive segmentation tools, including Intelligent Scissors, adopted into Adobe PhotoshopTM as Magnetic Lasso.